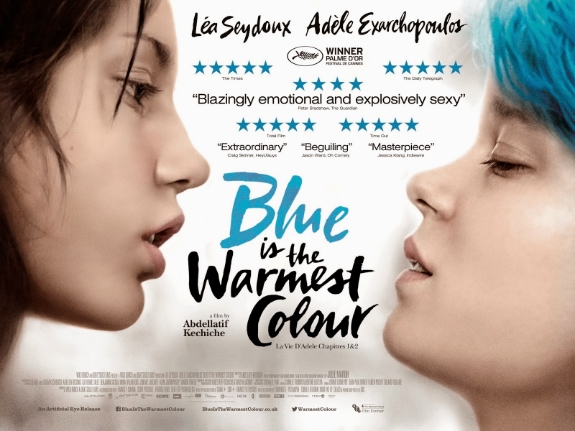 Blue Is the Warmest Colour Review

“Blue Is the Warmest Colour” (La vie d’Adèle) is one of those movies that often ends up on lists of movies to see before you die, or most realistic sex scenes, or best GLBTQ+ films. The movie won the Palme d’Or at Cannes, a BAFTA, and a long list of other awards. Steven Spielberg said, “The film is a great love story that made all of us feel privileged to be a fly on the wall, to see this story of deep love and deep heartbreak evolve from the beginning.” So, after all, the hype is “Blue Is the Warmest Colour” worth spending three hours watching?

“Blue Is the Warmest Colour” stars Adèle Exarchopoulos as Adèle, who at first glance is your typical 17-year-old French girl. She has dinner with her parents, she hangs out with her friends, and she is into a handsome boy at school. Yet like a lot of kids at that age, she is still finding out who she is, something she begins to understand after having an erotic dream about a blue-haired girl she passes on the street. Feelings that are further realized when a friend kisses her one day. So, what is a girl to do? The first thing is to break up with the boy, then go out with a friend to a gay bar where she conveniently runs into the blue hair girl Emma played by Léa Seydoux. It’s not long before the girls fall in love with one another and we follow the girls through the progression of their relationship together, from new love to living together to their careers of Léa’s art and Adèle becoming a teacher.

It sounds like a pretty standard love film so far, so what makes it so controversial or worth seeing? To French audiences nothing really, but to western audiences the extended and very visual sex scenes. In the US we are okay with heads exploding and bodies being torn apart in films, but show us a dick or a vagina and we need to cover our children’s eyes and slap an NC-17 rating on it. Yes, the sex scenes in the film are quite graphic, but not in a bad way. They show two people who care about each other doing what two people who care about would normally do. And ladies, if you are entering into a lesbian relationship for the first time, this film might give you a few ideas. For me, I did not find the scenes too graphic, but I’m not overly sensitive about sex on camera. If you are, then yes, you might have a problem with this film.

Director Abdellatif Kechiche focuses heavily on his desire for a realistic relationship between the two main characters by pushing the actresses to extreme exhaustion, doing hundreds of takes for some scenes to get the desired results, and it shows in the film. Adèle looks exhausted throughout the film, made even more visible to the audience by the lack of makeup Abdellatif would allow them to wear and his over usage of close-up shots focusing heavily on the performer’s faces.

The use of close-ups in my opinion, is definitely overdone in this film. Yes, I know the eyes are portals to the soul, and the close-ups create more emotional impact, blah, blah, blah. But when overdone I think we lose some of that impact. Do we really need an extended handheld shot of Adèle walking down a hallway where the only thing we see is her face? Or a conversation between two people that just cuts back and forth between close-ups of the two people talking? A lot of people think so, I however do not. Same with all the steady-cam hand held movement. It would have been nice to see an occasional wider shot done from a tripod to give us something different in such a long movie. But those are just a few nitpicky items in an overall beautifully written and acted film.

Taking five and a half months to make the film, Abdellatif provided us with a lovely movie. However, pushing your lead actresses to the point where they have both said they would never work with you again gives me some reservation about if I should support this movie. With the three-hour run time that could have been trimmed back a bit, this is certainly a film that you need to be in the mood for to watch. So, pour yourself a glass of wine, sit back and enjoy a love story performed by two brilliant actresses.