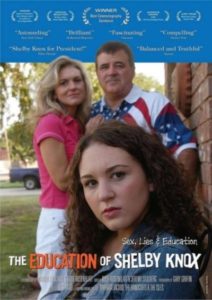 In my constant attempt to kill time while I should be working, I recently watched an old documentary called “The Education of Shelby Knox.”

The movie was made it 2005 and takes a look at a young girls attempt to promote sex education in a conservative Texas school system. Lubbock, Texas is a prime example of why abstinence-only education is not an effective way to teach children about sex. Lubbock has one of the highest teen pregnancy rates in the country and transmission of STD rates. According to the movie, the pregnancy and STD rates can be attributed to the Lubbock school policy that teaches no sex until you get married. Teachers are forced to say abstinence is the only option to prevent pregnancy.

Shelby Knox has loving conservative parents who take her to church every Sunday and do the best they can to raise their outspoken and opinionated daughter. Shelby has taken a vow of celibacy through her church, but even though she has chosen not to have sex, she understands that other kids her age don’t make that same choice, and they haven’t been properly educated on how to handle sex when they do. What Shelby and other students attempt to do, is motivate the school board to allow proper sex education. To teach children that abstinence should be the first choice, but if it’s not, that a condom does help to prevent pregnancy and STD’s. But the board and community seem set on ignoring the issue.

The movie does an excellent job of documenting not only the conflict in ideals between the students and the school system but also the conflict within Shelby herself. She is a “good Christian”, believing in God and the teachings of Jesus. Shelby is also a modern intelligent teenager, realizing that the Bible was written for a time and people who no longer exists and translates to modern society. Can she be a good Christian, yet still believe that it’s okay to have sex before marriage? Can she support gay rights even though according to her pastor, the bible is very clear that homosexuality is a ticket to hell? The relationship between Shelby and her pastor is a constant battle between ideals and right and wrong. They both recognize each other’s desire to do what’s right, but Shelby can’t reconcile her newfound beliefs with the outdated teachings of her church. One interesting and prime example is a scene where the pastor is teaching children about the transmission of STD’s, and he states the 2nd most common method of transmission is through direct skin to skin contact. He demonstrated this by shaking hands with a student, pointing out that neither knows where the others hands have been.

The pastor, parents, and education system do what many conservatives do when they can’t accept change, they use scare tactics. They tell children that if they have sex, they will get pregnant, or they will get an STD. Even if they use a condom they will most likely get pregnant or get an STD. They don’t talk about the statics and the odds of preventions, they talk about the statistics and the odds that it will happen. What we have seen in Lubbock and other abstinence-only school districts is the odds go up for teen pregnancy. Children just assume if it’s going to happen, no point in trying to prevent it. Or if they do actually have the forethought to take a condom with them, they don’t know how to properly put the thing on, or they believe that it ruins the mood.

The movie ends with Shelby getting involved in the gay rights movement in her town, and we see the two sides protesting one another. We also see a stark contrast in the mindset of these two groups, the gay rights movement just looking for equality, and the conservative nutcases, with their signs condemning the students with comments like, “AIDS Cures Gays.” and other hateful commentary.

Review by Milo Denison, who also blogs at www.milodenison.com