Anon – An episode of Black Mirror meets a paint by numbers cop thriller.

I should start this review by saying that I watched the movie at 10:30 in the morning, after having a few drinks the night before. Then on top of the hangover, I walked to the theatre for the screening in cold pouring rain. What I’m saying is, this review might be slightly impacted by my mood at the time I watched it. But I don’t think so. Even as I write this the next day, I still don’t have much of a good impression of the film.

Anon is directed and written by Andrew Niccol. The film takes place in a slightly dystopian future where people have an implant that allows them to record and play back everything they see, like in the Black Mirror episode The Entire History of You. Since people are able to record everything they see, the police have the ability to remotely access anyone’s recordings, living or dead. If dead, and someone is murdered, they can see what the victim saw, making crime almost impossible. The system also allows people to see someone’s job, name and other information like in the Black Mirror episode Nosedive.

The film stars Clive Owen as police detective Sal Frieland who is tracking a murder that leads him to an unnamed girl (Amanda Seyfried). She is an anomaly in this word as someone who makes herself invisible to people via her ability to hack video systems and eye implants. In Sal’s investigation, he finds that the killer is able to hack a person’s eyes and make them see whatever the killer wants. In the case of the murders he is investigating, it is the killers point of view they see. In essence, people are watching themselves being killed. This tends to make the film feel more like a first-person shooter than a movie. But, nowadays often first-person shooters are made to feel like movies so perhaps Andrew Niccol is making a statement about that. But I doubt it. I think he is more or less making a statement about privacy and that anything can be hacked, or maybe he just really likes Black Mirror. It is clear that he is heavily influenced by both the show and noir-style cop thrillers in this movie. Almost all the cops smoke, and Sal drinks too much, is divorced, and is haunted by the memory of his deceased child. Amanda Seyfried is a sexy seductress. The police commissioner is a jackass. And well… everything else you would expect from a film that black mirrors a noir crime thriller.

Is there anything to like about this film? You get to see a naked Amanda Seyfried, which is nice, but that is about it. If you are a fan of hers and want to see Amanda Seyfried in a good movie, go watch Gringo.  If you are thinking about watching Anon, don’t waste the money and watch a few episodes of Black Mirror instead.

Anon opens in UK and Irish cinemas May 11th. 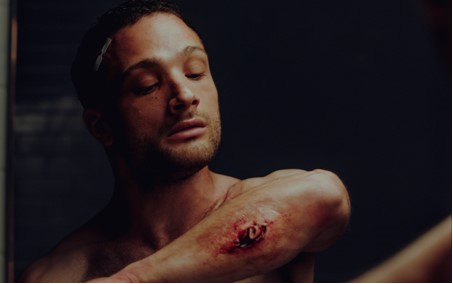