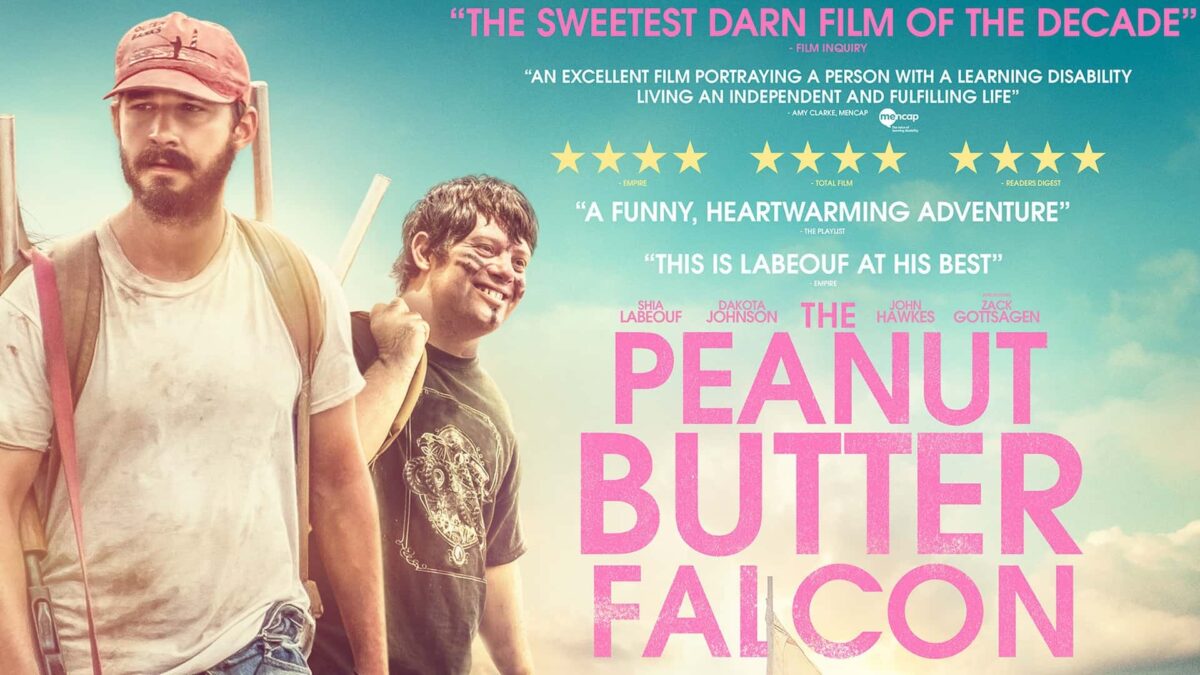 The Peanut Butter Falcon proves that an actor with autism can be the lead in a film and that a A-list actor can be the co-star.

As a movie genre goes the “hero’s journey” is nothing new. But because it isn’t new doesn’t mean it is bad. In general, I enjoy these types of films. Movies that follow the protagonist as they do a road trip encountering interesting characters along the way. Stories like the Odyssey, On the Road, Oh Brother Where Art Though, Huck Finn, and so many more. In The Peanut Butter Falcon, this journey follows Zack (Zack Gottsagen) and Tyler (Shia LaBeouf). Zack is an autistic young man who for some reason has been placed in an old folk’s home instead of a home for people with special needs. In the hom e, he is taken care of by Eleanor (Dakota Johnson) the kind caretaker with the best intentions but also treats him a bit like a child.

Zack sneaks out of the home to pilgrimage to a wrestling camp that he knows of from a VHS tape he has been watching. Along the way he encounters Tyler, who is on the run from some rival crab fisherman. The two form a quick friendship on their journey as Tyler takes on the role of mentor and wrestling trainer. And Zack teaches Tyler that there are still things in the world to care about. Tyler has some family trauma that we learn through a series of flashbacks.

Writers and co-directors Tyler Nilson and Michael Schwartz do a nice job in their portrayal of someone with autism giving him ample opportunity to shine in the film with some brilliant dialog while also not being afraid to let Zack be the joke. Shia LaBeouf tackles this role with the same level of intensity that he seems to do with every character he plays, a bit of comedy, a bit of intensity, and a bit of Shia which in this case works well. And Dakota Johnson, well she’s Dakota Johnson.

As to the story, however, it is a bit cliché in a lot of ways. At one point our two hero’s encounter the wise blind black man who baptizes them in the water. It has long thoughtful discussions as they slowly walk through the fields or coast down the river in a raft. All the way to the end of the hero’s journey where they each reach their potential and have that character arch that we expect in a story. Including that of Eleanor who after catching up with the two learns not to treat Zack like a child and to relax. And of course, we have the romance as Eleanor and Tyler fall for each other, because well, we need some romance I guess.

Lilson and Schwartz do a nice job of giving us a low budget indie film that doesn’t preach to heavily at the audience, doesn’t spend a lot of time on unbelievable action sequences or special effects, but instead simply follows two people on a journey to show us that a person with autism can be the lead in a film and that sometimes we just need a low-key film to enjoy for an hour and a half to feel good about the world.