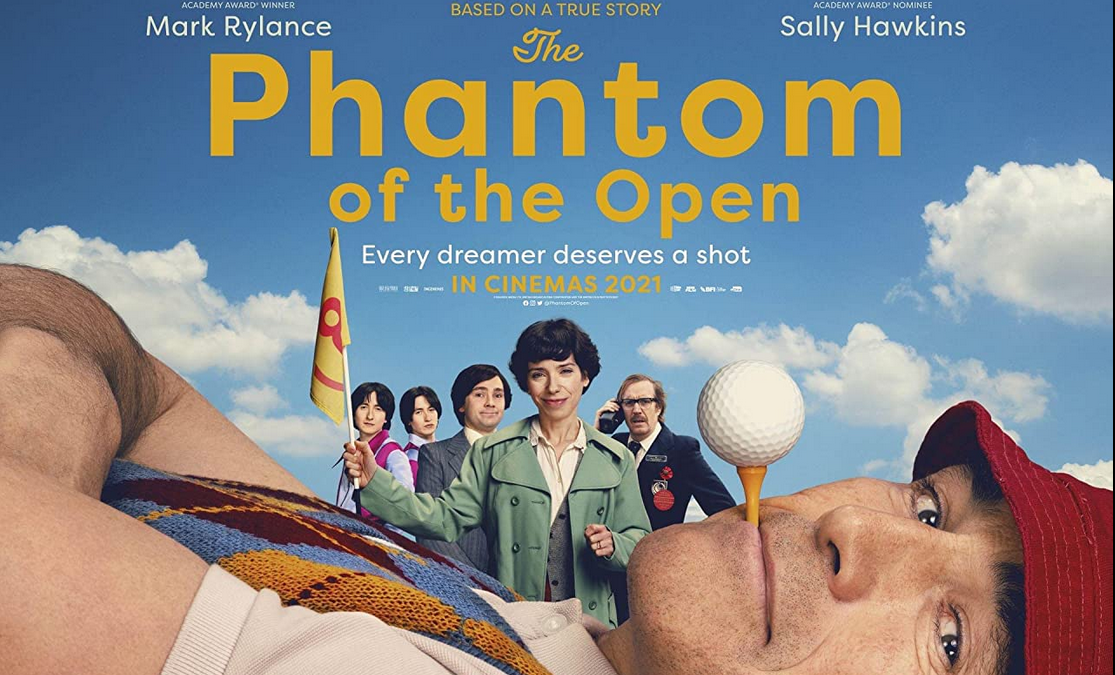 The Phantom of the Open stars Mark Rylance, Sally Hawkins and Rhys Ifans. It’s based on a book of the same name written by Simon Farnaby and Scott Murray. The film is directed by Craig Robert.

It’s based on the real life story of Maurice Flitcroft, a shipyard worker from Barrow-in-Furness in Cumbria, who takes up golf in middle age. He declares himself a professional golfer and manages to gain entry to The British Open Golf Championship in 1976 where he found himself competing with famous professional golfers like Seve Ballesteros. He received the worst score in the tournaments history. Officials tried to ban him from entering further competitions but he used different disguises and fake names to continue to compete.

When the media run a story about him, people start getting behind him and his name goes around the world. His biggest supporters are his wife Jean and his twin sons, who also have an ambition to become disco dancing champions. His other son is more serious with a good career high up working in the offices of the shipyard and is appalled to see his father make a fool of himself and shame the family.

The film has a bit of a surreal edge to it. There are some dream like sequences including a terrific scene with Maurice being catapulted into the air as a golf ball. These moments add some beautiful visual elements to the film.

It’s always a treat to see Mark Rylance on screen and here he really captures an innocence to Maurice. I loved his relationship with Sally Hawkins character Jean. You can clearly see the deep love they have for each other and the optimistic way they live their lives, despite the challenges they face.

There are some very funny laugh out loud moments, but there are some flat moments of humour as well. I found the first part dragged a little and some jokes were laboured but once the pace picked up and got going I really enjoyed it. The characters didn’t appear very real in parts and came across a bit stereotypical, but I think this was deliberate to add to the farcical element of the story. The plot does follows a predictable path about an underdog trying to overcome adversity. Despite this, I was still routing for Maurice and his golfing ambitions and I did find myself getting emotional in parts. I must give a nod to Rhys Ifan’s character and his sidekick who played the two villains as the golf officials. I loved the dynamic between them and the way they tried to take down Maurice. It heightened the comedy and added to the conflict.

I’m personally not a fan of golf, I find it very boring to watch. But I think that’s what makes it comedy gold. This film did remind me of another film called Eddie the Eagle. Both have a very similar premise, this one about an underdog trying to succeed in golf and Eddie the Eagle about an underdog trying to succeed in ski jumping. If you like the style of Eddie the Eagle, you’ll love this. Overall The Phantom of the Open wasn’t as funny as I thought it would be, but I still laughed and I really enjoyed it. So if you’re looking for something light with a good dash of absurdity and humour, Phantom of The Open is the one for you.

Out in Irish & UK Cinemas Nationwide on March 18th

The Phantom of The Open Trailer